This site has been quiet since early 2020 (and there’s probably a pretty good reason for that…), but despite our silence online we’ve still been hard at work with our kākā and toutouwai research. Since our last update we have published a couple of papers, one showcasing the toutouwai’s prodigious long-term memory and another highlighting the difficulties of replicating cognition research in endangered species, as well as a short opinion piece on some cool parrot tool use research. If you check out the newly updated Student page, you can also see the range of cool projects that our group is currently working on! Finally, we have some exciting new projects on the horizon for 2021, including getting the first experiments for the ManyIndividuals network up and running, developing AI based methods to recognise individual kākā and developing fear based strategies for reducing cat predation (an MBIE Smart Ideas project).

Kākā and kea are well-known for their clever behaviour, and PhD student Daniel Donoghue is interested in how they learn new things.

You can have a listen to his interview with Radio New Zealand,  ‘Kākā TV – teaching smart parrots new tricks’, to hear about the cool research he has been doing. 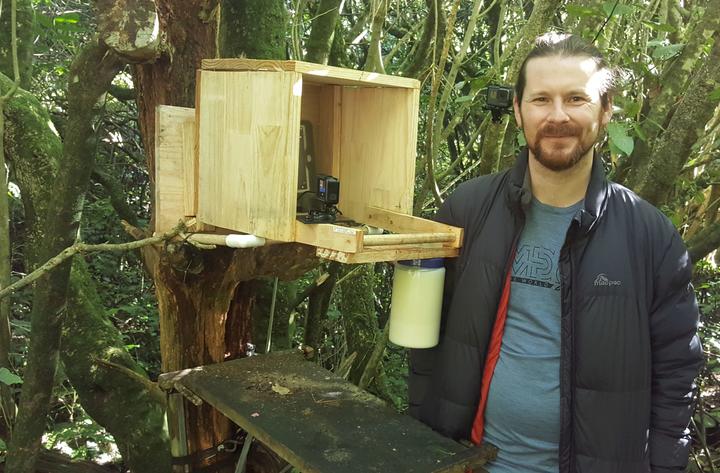 Daniel and his ‘drop-in’ kākā feeding station at Zealandia.

When we think about animals storing food, the image that usually comes to mind is a squirrel busily hiding nuts for the winter.

We don’t usually think of a small songbird taking down an enormous invertebrate, tearing it into pieces and hiding these titbits in the branches of trees to snack on later in the day. But this is also a form of caching behaviour, where food is handled and stored for later consumption.

For caching animals, the ability to recall where food is hidden is crucial for survival. My research into the spatial memory performance of a caching songbird, the New Zealand robin (Petroica longipes), shows male birds with superior memory abilities also have better breeding success.

There’s no argument that New Zealand is home to a host of unusual birds, including the nocturnal, flightless parrot kākāpō (Strigops habroptila), or the hihi (Notiomystis cincta), the only bird in the world known to mate face to face.

By outward appearances, the small, grey toutouwai (Māori name for P. longipes) is not particularly remarkable. But its noteworthy behaviour includes feasting on some of the world’s largest invertebrates. There is only so much of a 30cm earthworm a 30g bird can eat, and rather than waste the leftovers, toutouwai will cache any surplus prey they don’t want to eat immediately.

For selection to act on a trait, there must be individual variation that is passed onto offspring and that influences survival and reproduction. While researchers had looked at how spatial memory influences winter survival in caching mountain chickadees, no one had examined whether memory performance influences reproductive success in any caching species. Our research tackles this issue.

Measuring memory in the wild

We measured the spatial memory performance of 63 wild toutouwai during winter. We gave the birds a circular puzzle that had a mealworm treat hidden inside one of eight compartments. For each bird, we put the puzzle at the same location in their territory several times in a single day, with the food always hidden in the same spot.

Pepper searches for a mealworm treat

Over time, toutouwai learned the location of the hidden treat and began opening fewer compartments to find the mealworm. We then followed these same birds through the next breeding season and looked at whether their spatial memory performance (measured as the number of compartments they had to open to find the mealworm) was linked to their ability to feed chicks, and whether it influenced the survival of their offspring.

By contrast, we did not find the same patterns for females. This is the first evidence that spatial memory is linked to reproductive fitness in a food caching species.

If there is such a great benefit for males in having an accurate recall of locations, why aren’t all males the best they can possibly be in terms of spatial memory performance? In other words, why didn’t all the male toutouwai we tested ace our memory task?

Intriguingly, our results suggest a role for conflict between the sexes in maintaining variation in cognitive ability. We found no effect of memory performance on female reproductive success, suggesting that the cognitive abilities that influence reproductive behaviour may well differ for females.

Such a difference between the sexes would ultimately constrain the effect of selection on male spatial memory, preventing strong directional selection from giving rise to uniformly exceptional memory in our toutouwai population.

Our work produced some tantalising evidence for both the causes and consequences of variation in cognitive ability, but it also raises several more questions. For example, while we’ve shown that memory performance matters for males, we still need to examine how it influences caching behaviour.

Another mystery that remains is why spatial memory ability may have less of an influence on female toutouwai fitness.  One possibility is that longer-term spatial memory for specific locations (rather than the short-term memory we measured) may matter more for female reproduction, because females do all of the nest building and incubation.

So far, we’ve only provided one piece of the puzzle. To get the full picture of how cognition evolves, we have many more avenues left to explore.

Read the original article on The Conversation.

Toutouwai can take down some of the world’s largest invertebrates, but if you’ve caught a 50 cm long earthworm, what do you do with it all? One answer is to shake it to pieces and hide it around your territory to snack on over the next day or so. This ‘caching’ strategy lets toutouwai make the most of temporarily abundant food by saving some for later.

Caching is widespread in the animal kingdom, yet there have been very few studies looking at how individuals develop caching behaviour. For her MSc thesis, Latu Clark investigated how juvenile toutouwai learn to make their caches. The results of her work have just been published in Behavioural Processes.

After young birds left the nest, Latu visited them a couple of times a week for up to 12 weeks. Each visit, she fed the birds several mealworms and documented their behaviour. If a bird cached, Latu monitored what happened to their cache (check out the image below of one of her juveniles inspecting the camera – if you look closely you might spot a cached mealworm in the log in the background). Her work demonstrated that it takes several weeks for juveniles to develop some aspects of adult-like caching behaviour, but that other components of caching appear spontaneously and do not change during development.

These results suggest that learning how to handle prey and hide it for later comes naturally to young toutouwai, but that they also require extensive experience to do it well. Interestingly, it also seems that toutouwai caching behaviour follows similar developmental trajectories to other, distantly related Northern hemisphere bird species.

A juvenile robins gets up close and personal with a camera. Photo courtesy of Latu Clark.

It’s been a while since the last update, but that’s not to say that we haven’t been hard at work! The robin/toutouwai breeding season is well underway and this year we’ve also begun to look beyond the sanctuary fence, to try and understand what might be limiting the toutouwai’s survival. Meanwhile, we’ve been developing a new research project with kākā (watch this space…).

However, this year I also took time to reflect and focus on writing a review together with Martin Schmelz. Our paper, ‘Cognitive test batteries in animal cognition research: evaluating the past, present and future of comparative psychometrics’, was recently published in Animal Cognition. In it, we examine the various pitfalls and possibilities that lie ahead for non-human cognitive test battery research. (As an added bonus, it also includes discussion of the relationship between reproductive success and cognitive test battery performance in wild male North Island robins)

There’s already some exciting things happening in this rapidly growing field, but there is still a lot of room for improving how we design, implement and analyse non-human test batteries. We hope that our review will be a useful resource for anyone who is undertaking non-human cognitive test battery research.

However, I did manage to make time this week to chat about our research to Sciblogs and Radio New Zealand.

To read about why I think it is important to study bird brains, check out this interview with Sciblogs.

To listen to me discuss how to attract an enraged researcher in the forest, among other, more scientific things, have a listen listen to this interview with Radio New Zealand.

had some pretty distinguished visitors today. Professor Nicky Clayton and Artist and Writer Clive Wilkins of Cambridge’s Psychology Department paid a visit to Zealandia and met a few of the locals. While they are in town Nicky and Clive are also presenting the ‘The Captured Thought‘, a collaboration that explores thought and experience.

Bruiser participated in my first North Island robin cognition study in 2014 and is no stranger to cognitive tests. In my latest research, carried out in 2015 and recently published in Behavioural Processes, Bruiser quickly mastered opening swivel lids to grab a snack. By contrast, those robins that had never been tested were slow to catch on.

If prior experience affects performance in a cognitive task, how can we fairly compare naïve and experienced birds? Designing tests that can give us unbiased, accurate measures of cognitive ability in the wild gets even more complicated when we start to consider other factors, such as hunger or boldness.

As it turns out,  I also found that hungry robins performed worse than their well-fed counterparts in a test of inhibitory control. These birds were more likely to keep pecking at food through a transparent barrier, rather than reaching around the barrier to retrieve it.

Lid-opening and ‘detour-reaching’ tasks are commonly used cognitive tests for birds. However, the robins’ performance reveals some pitfalls in relying on these tasks to measure individual cognitive ability. It hardly seems fair to compare a spoilt little Bruiser with a hungry bird who has never been to robin school…

Over the past few weeks Latu has been hard at work documenting the caching behaviour of the youngest birds in our study population. Judging from the footage, it looks like her efforts to film cache sites haven’t gone unnoticed by all of the juveniles…

Robin breeding season has been in full swing for the past couple of months. Two weeks ago one of our nest cameras caught a surprising new kiwi behaviour on film.

You can check out what happened here.

Sadly, Darcy and Lizzie’s nest was destroyed by the kiwi and their 10 day old chicks were killed. This was a disaster for the robin pair (Lizzie has left Darcy as a result), but it is the first time a little spotted kiwi has ever been seen doing something like this.

This unexpected ‘dark side’ to our national icon captured quite a lot of local media attention and created some… interesting headlines: